The Federal Reserve Bank is a key player in our country’s economy.  Price stability and changes in the labor market relate to major aspects of the Fed’s mandate. In 1977, Congress amended the Federal Reserve Act, directing the Board of Governors of the Federal Reserve System and the Federal Open Market Committee to “maintain long run growth of the monetary and credit aggregates so as to promote effectively the goals of maximum employment, stable prices and moderate long-term interest rates.” (www.chicagofed.org)

Essentially, this makes the Federal Reserve Bank, by its structure and evolution of its functions, into a hybrid entity. 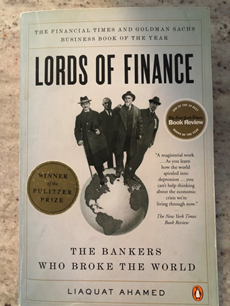 As a basis for money supply, the gold standard faded away after World War I and was replaced by central banks with their balance sheets reflecting their underlying economies.  (See Lords of Finance:  the Bankers Who Broke the World, by Liaquat Ahamed, 2009, for the history of how central banks failed after World War I, leading to the Great Depression )

Economic strength to provide financial stability shifted from reliance on a precious metal to the underlying productivity of a real economy.

The U S Federal Reserve System began its hybrid existence with a legislative compromise under President Wilson over a hundred years ago, was updated during the Great Depression, and evolved further through strong central bank leadership in the post World War II economic boom. 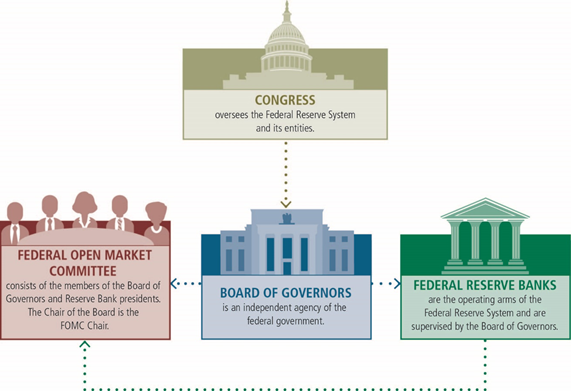 Today we have a system with a presidentially-appointed Federal Reserve Board, along with a remnant of that original Wilsonian compromise, where the original twelve regional Federal Reserve Banks also have representation on the Federal Open Markets Committee (“FOMC”) that sets interest rate policy in the United States.  All twelve bank presidents are present and speak at each meeting of the FOMC, though only five vote, along with seven Federal Reserve Governors appointed by the President.

These regional presidents are selected by directors chosen in private voting by member banks, adding a private sector element to the governance of the Federal Reserve System.

Staffed mostly by economists with strong academic backgrounds and generally led by a presidentially-appointed economist, the Fed builds on its reputation as a dispassionate professional organization that does the hard work of maintaining price stability, along with financial stability of our banking system, while seeking maximum employment.

In some ways, the Fed is a think tank, or an academic institution, whose staff economists become thought leaders on the economy. This group is separately influential in developing Fed policy. Their influence goes beyond its basic legal mandate as their structure brings together ideas from both government and the private sector. 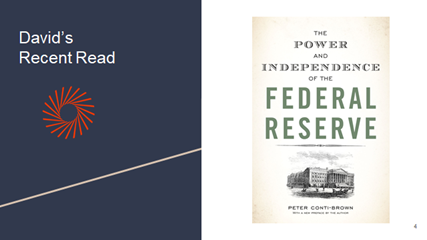 Confidence in this work by the Fed helps fuel a strong economy, a strong currency and a sound international financial system.  Other central banks, especially in Europe, Japan, and China follow similar policies and procedures of the domestic Fed to contribute to the current status quo in international economics.

What troubles some today is the great expansion in central bank balance sheets to stimulate the economy in the recovery from the global coronavirus pandemic. Factors such as:

In addition to these factors, it is a valid opinion that the Central Bank stimulus after the Great Recession of 2008-2009 was too limited to produce a robust recovery while leaving inflation benign. As a result, current economic leaders have engaged in the largest expansion of central bank balance sheets since World War II.

Below illustrates the Fed balance sheet in the United States from 2007 to June 9, 2021. 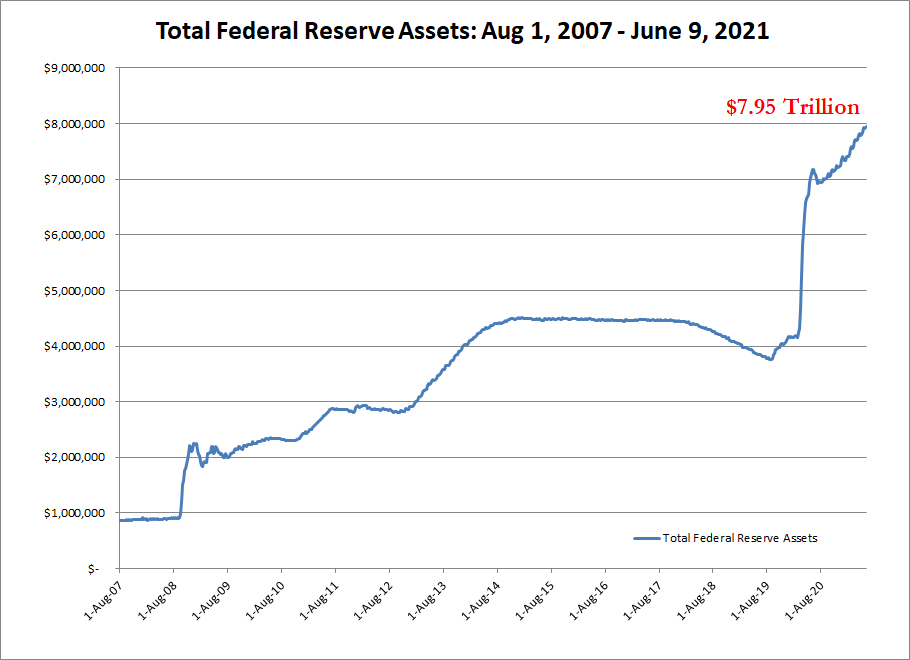 The current balance sheet at nearly $8 trillion dollars is  growing much faster than the $2 trillion dollar increase after the Great Recession of 2008-2009 and represents about 34% of the total gross domestic product of the United States.  Though the balance sheet expansion following 2009 did not produce an inflationary problem, some believe this much larger change post-COVID will, potentially cause a whole round of difficulties like the U S economy endured in the 1970’s and 80’s when inflation soared to double digits.

Much of this expansion is not related to the Fed’s primary tool of controlling short term interest rates. Its purchase of longer-term government and mortgage-backed securities is directed at longer term rates and the overall yield curve, directly affecting mortgage rates and housing’s role in the economy.

Other central banks have also expanded their balance sheets bringing the total central bank assets from the U S, Europe, Japan, and China to nearly $30 trillion. In an international economy, problems in major currencies can easily spill over into problems internationally.  While China’s and the U.S. balance sheets make up more than a third of their country’s GDP, others are far worse. The European Central Bank’s total assets exceed 60% of European GDP and Japan’s exceeds 130% of its GDP.  U.S. Treasury bond interest rates can remain lower and help finance the federal government deficit when balance sheets look like this around the world.

With domestic inflation spiking as the economy rebounds from the coronavirus recession, the Fed has already launched the greatest peacetime expansion of the money supply, while arguing that inflation will only be temporary.  As it does this, its public statements have also called for action on income inequality and other social factors that may be hindering movement to a new phase of economic re-structuring. How the Fed acts in the coming months will greatly influence the debates around monetary expansion, concerns about persistent inflation, and whether or not there has been an ”overreach broader than the mandate”.  Its actions, right or wrong, will continue to be a factor in responding to economic conditions as they exist today.