As we head into the second year of what we at Propel call “The New Economy,” we ask ourselves how best to position for growth in a volatile market. Part of that question includes how much to invest internationally? Based on economic fundamentals, changing currency values, trade agreements, and government stimulus that is happening outside of the United States, we think the tide is turning to favor international markets this year.

Many market commentators are in agreement with this assessment of change. In the past, different opinions have gone back and forth while many made the mistake of too much “domestic bias” in their investment allocations. 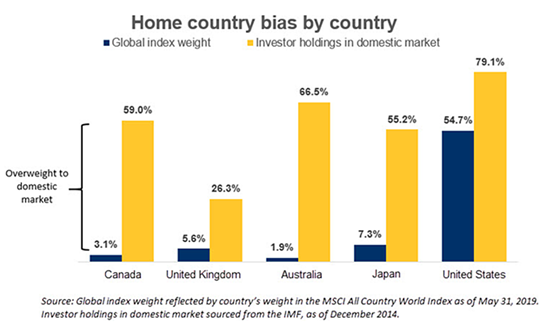 Domestic bias is a normal response of investors across the world, preferring the familiar in their own currency versus investing internationally. It’s worth noting that the US and United Kingdom investors have less domestic bias than investors in the other countries listed in the above chart.

U.S. Dollar strength and its impact on international investments

Due to dollar strength and other factors, domestic versus international investment outperformance changes over time. For instance, since the market recovery in 2009, U.S. stocks have outperformed international companies. During the period from 2002 to to 2009, however, international stocks outperformed the U.S. You can see in this chart how performance has varied for the past 50 years.

Beginning in the summer of 2020, with a federal deficit moving above $20 trillion and a smaller gap in short term interest rates between U.S. and others, the strength of our Dollar began to wane. That means that other currencies are rising in value and makes it easier for non-U.S. companies to make money in a U.S. Dollar-dominated global market. 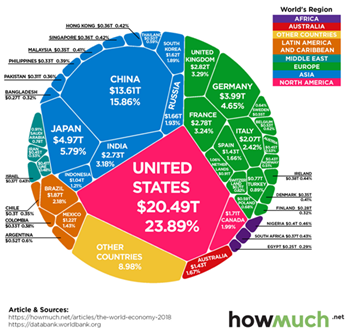 When we think about the economies around the world, there are two general definitions.  Developed Markets are defined by Investopedia as “one with sustained economic growth, security, high per capital income, and advanced technological infrastructure.”  The other category is Emerging Markets. They are defined by Investopedia as economies that are “in the process of becoming a developed economy.”.

The world opportunity set, based on the size of economies, is illustrated in this chart from the World Bank. The Asian economies in blue, including China, Japan, and India, are now larger than all of North America.  Europe’s importance in green stands out.  Differences in opportunity vary based on differences in economies. Russia, India, and Indonesia are emerging market economies in Asia, while China and South Korea are increasingly considered developed markets along with Japan. 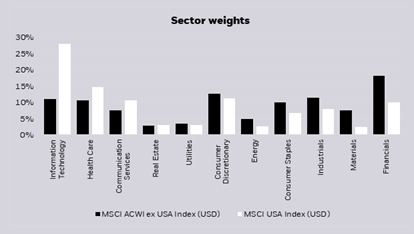 Latin America includes some emerging markets, while North America is mostly a developed market, as is much of Europe. Turkey, Poland and Eastern European economies are part of emerging markets.

Differences also exist in the investment sectors that predominate in different regions. MSCI’s All World Index shows the dominance of information technology, healthcare and communication services in the U.S. stock market.  In the rest of the world, financials, materials, industrials, and consumer stocks predominate.  These different sector weights create unique opportunities in around the world.  (MSCI data as of June 2020).

International markets have a larger middle class consumer base than the U.S. 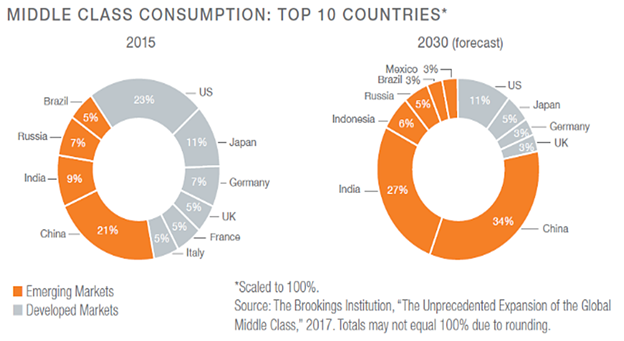 Key among these differences is the emergence of a larger middle class consumer base.  In this  Brookings Institution (BRIC) Chart, great changes in middle class consumption are expected over the next decade.  In 2015, the BRIC emerging markets made up only 45% of top ten country consumption. If you look at the 2030 chart, you can see that emerging market middle class consumption is on track to grow to 78% - a major change.  As populations move from poverty to the middle class, they create entirely new opportunities for their economies.  As consumers become more dominant in their local economies, there is a move from export-driven competition to internal-development fostering new company growth at home.

As these home-based economies develop, so do educational systems.  The increased prosperity of the local citizenry results in growth in research and development that inevitably leads to economic growth.  Ultimately, these profitable companies develop with new ideas and techniques.  For instance, leadership in patents, traditionally held by the United States, is shifting  to other areas around the world.

As in all market cycles, correlations (aka likeness) between the U.S. and international markets will continue to change. Economic growth through globalization and more uniform supply chains has tended recently to make global investments more correlated to one another. As new patents and economic opportunities change, recent correlations have been decreasing, creating better opportunities for diversification benefits in international investing.