Since the Covid lockdowns have ended, unemployment has remained stubbornly high. Multiple factors affect employment, and getting people back to work is likely not as simple as eliminating the federal unemployment subsidy. Our current labor market may have long-term impacts on our national economy.

We last published a blog article about the U.S. Labor Market in late 2019: The November 2019 Jobs Report – Can We Trust It? — Propel Financial Advisors. At that time, the Bureau of Labor Statistics had just released its November 2019 jobs numbers reporting a 50-year low in unemployment at 3.5%.  Also, at that time, food service was one of the largest growing areas of employment. What a difference a pandemic makes!

As we celebrate a return to partial normalcy this summer post-COVID, some changes in the labor markets are glaringly obvious.  While employment rates have experienced highs and lows throughout modern history, the spring 2020 plunge followed by the spikes of returning workers is unprecedented.  The chart below shows that unemployment hit a high of 6%+ during the recession after the dot com bubble and a high of 10% during the recession following the prime mortgage crisis.  Thanks to COVID, in April of 2020, unemployment reached nearly 15% before plummeting back down to the June 2021 rate of 5.9%. 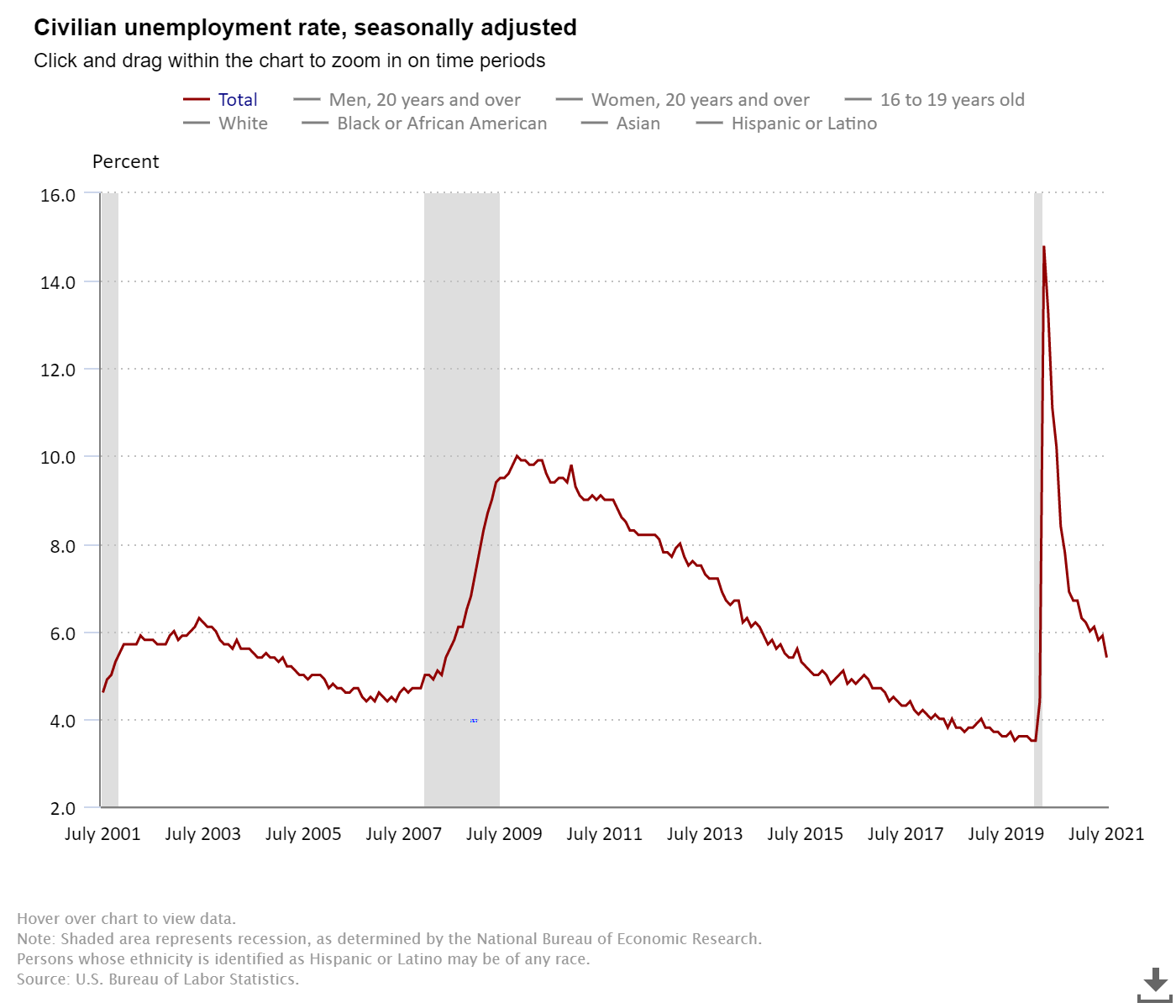 It is no secret that most everyone had to make drastic changes in their lifestyles over the past year and a half.  The U.S. government pumped unprecedented amounts of cash into the economy.   Businesses had to reduce or stop work altogether, while some could move forward by allowing at-home work where it had never occurred before.  Americans were spending far more time at home with a lot less to do.  Many worried about how to make ends meet while others did extraordinarily well financially.

As many folks return to work or return to a more “normal” culture, there are some businesses who simply do not have the labor to do so.  Restaurants, hotels, and other service industries who rely on cheap labor to produce a product that the public will buy are scrambling.  Throughout the country, we see “Help Wanted” signs.   Fast food locations are shutting down, where only 18 months ago, they were booming.

Historically, restaurants and hospitality have always made do with short-term workers.   After all, most folks cannot survive on minimum wage and little to no benefits.  Many of those workers were entry level or students who moved onto higher paying jobs when they had enough experience or education.  Some blame the labor shortage on the government stimulus of higher unemployment benefits that expire in September of this year.  There are governors, in Tennessee and Florida, for example, who  even stopped unemployment benefits earlier than required, believing the measure would spur folks going back to these kinds of jobs.

A Change in Priorities for Workers

But what if the labor shortage isn’t primarily laziness or taking advantage of the system? What if the unprecedented climate created by COVID has simply resulted in a major shift in the way American workers view their jobs versus their personal time?  Workers in major metropolitan areas who drove 2 hours round-trip to the office pre-COVID got to spend their mealtimes with their families instead.  Restaurant workers lost jobs overnight and found new ones delivering for Amazon, Instacart, or UberEats. Kids were home from school, and many daycares closed, which made it nearly impossible for both parents to work. For single parents, it was even harder.  NPR published an article on June 24th about the number of workers simply quitting certain jobs: The Great Resignation: Why Millions of Workers Are Quitting Their Jobs : NPR

Most of Americans’ leisure activities were severely limited or completely closed during the pandemic.  This resulted in a huge shift toward home entertainment options like streaming and outdoor activities like bicycling. For those workers who were still earning, they were paying off credit card debt and saving money at a level that has not been seen in this country in decades. 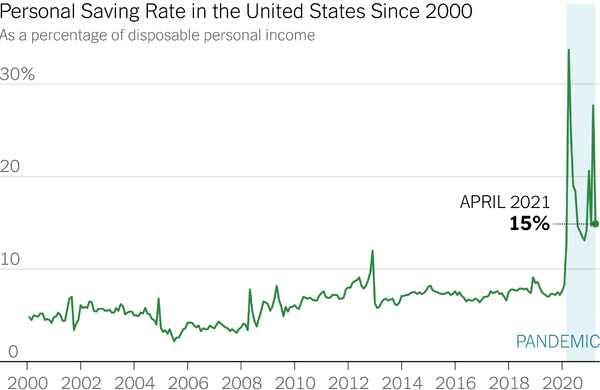 And what about those restaurant workers?  Yes, they had higher unemployment benefits than they would have in previous periods, but one cannot ignore the undesirable aspects to that sort of work:

It is important to note that the Federal Minimum wage has been set at $7.25/hour since 2009.  That is the longest stretch without an increase since it was created in 1938.  Some states have the option to set the minimum wage even lower than that (see State Minimum Wage Laws | U.S. Department of Labor). Should a worker be lucky enough to get a 40-hour work week at $7.25 an hour, it usually requires working more than one job and still only pays comes out to $15,000 per year. Restaurant servers are paid much less per hour and hope for tips to make up the difference.

It’s not just workers who are doing things differently.  Businesses have been increasing their use of machinery and replacing human labor for decades.  How often do you check yourself out at the bank or at a store rather than use a real live bank teller or cashier?  That did not happen overnight, but some automation did thanks to COVID.

Time Magazine published an article on August 6, 2020, written by Alana Samuels (Machines and AI Are Taking Over Jobs Lost to Coronavirus | Time) that did a wonderful job outlining human to robot/AI shifts that have occurred in modern history and how it’s different this time.

From the invention of the spinning jenny in the 1760s that replaced human weavers to the creation of the internet that revolutionized the travel industry, modern human beings have been replaced by machines by the thousands for nearly two hundred years.

The alarming difference during the first year of COVID was the rapidity at which the shift occurred.  According to Samuels, robots were quickly replacing human beings to clean floors at nearly empty airports; hospitals and universities brought in Chowbotics’ robots to make salads in cafeterias; and malls and stadiums used security-guard robots created by Knightscope to keep an eye on their now empty locations. Call centers employees around the world were sent home for the pandemic and replaced by chatbots, which could handle a far higher volume of calls than human beings could ever hope to.

…in the past, technology was piecemeal, giving employees time to transition into new roles.  Those who lost jobs could seek retraining…This time the change was abrupt…There was no time to retrain…and these workers were left on their own to find new ways of mastering new skills.  They found few options.

Lack of Job Training in the United States

To be honest, I had not thought about job training much before reading Samuels’ article. Perhaps because it hardly exists outside of college universities in the United States.   It did used to be something that governments took into consideration though.  Samuels points out that the shift from farming to a more industrialized society in the late 1800s and early 1900s was assisted by the states’ expansion of public schooling. Consider the New Deal under President Roosevelt during the Depression that created new jobs across the country.  WW2 veterans could attend college thanks to the GI Bill. According to Samuels, little else has been done since the 1950s. That was 70 years ago.

The United States as a culture has focused its plan for training on young adults between the ages of 18 and 25 in the form of university degrees and technical certifications. Samuels’ states that the U.S. “spends 0.1% of GDP to helps workers navigate job transitions, less than half what it spent 30 years ago.” When you consider that most adults in this country work well into their 60s and that technological advances are occurring rapid fire, that is a pretty big hole in long-term planning for American workers.

Will Robots Lead to Higher Unemployment?

While much of Samuels’ article might cause alarm, she also tempered concerns with some rational facts.  During the many drastic shifts in employment from humans to robots/AI technology over the decades, people “worried that advances in technology would create a world without work, and that’s never proved true.”

If you refer back to the Unemployment graph earlier in this article, you’ll see that periods of spiked unemployment weren’t the result of a new technology, but instead resulted from severe economic downturns. Obviously, the Great Depression is another great example. When you consider all of the incredible technological advances we’ve seen just in the past several years, U.S. unemployment actually hit a 50-year low of 3.5% in November of 2019.

Of course, there are individual workers who will continue to be adversely affected by AI use, but overall, the labor force does not appear to be suffering as there is always another door that opens at some point.

COVID deaths and the existential consequences

The CDC has only released preliminary numbers for 2020 and will not release a final count until the end of this year. However, it looks like the United States saw a 17% increase in deaths in 2020 compared with 2019. That is half a million more people dead than usual. Consider all the folks who are impacted when a person dies from family to friends to coworkers.  That does not include the healthcare workers and family/friend caregivers of those who were sick or died of COVID-19. 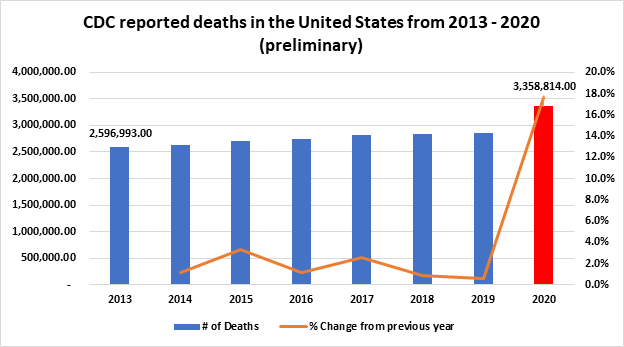 When you consider the physical and emotional toll that COVID took on our citizenry in addition to the enormous changes we had to face financially, it is no wonder that so many do not want to return to miserable job prospects for little money.

Perhaps It is a Shift, not a Shortage

In closing, while it might seem easy to blame increased unemployment benefits for a labor shortage, we think that digging deeper into the trends in our post-COVID society is a better way to understand what we are seeing unfold. After all, the construction industry was suffering from a labor shortage after the subprime mortgage crisis and no additional unemployment benefits were paid. In the fall of 2020, folks were returning to work in droves despite unemployment benefits that were double what they are now.  Is it not more likely that we are simply seeing a change in the types of jobs that people are willing to do for so little money?

In a recent discussion with family members, we noted that one of the five Hardee’s locations had closed in our small town. Is that really such a bad thing? I have no doubt that those workers will find new jobs, and perhaps some folks will even eat healthier without the convenience of that location.