Headlines were long and loud in mid-August when the United States 30-year Treasury Bond Yield dipped below 2% for the first time in history.  To make matters worse, the 10-year bond yield fell lower than the 2-year bond yield.  In fact, shorter term yields have been surpassing longer yields for months. When longer rates fall below shorter rates, it’s called an inversion.

The U.S. Treasury market has purposely offered very low yields on its bonds since the Great Recession of 2008-2009.  The Federal Reserve, or The Fed, is the central banking agency in the United States.  It is The Fed’s job to monitor and apply strategies that support monetary policy in our country.  When stock markets declined substantially in 2008 and plunged the world into a recession, the Fed’s response was to lower the Fed Funds Rate (short-term rates) to effectively 0% by December 2008 and implement a buyback program of millions of dollars’ worth of government bonds in the hopes of spurring spending by companies and taxpayers during a lousy economy.

The plan worked.  Bond yields increased slowly over the next several years along with equity markets as companies and economies around the world took measures to recover from the Great Recession.  The Fed even began raising rates again with the first increase in December 2015.  Routine increases began in March 2017 and continued through December 2018 when inflation and employment numbers in the U.S. reached healthy levels.  At the end of 2018, the Fed Funds Rate was 2.25-2.5%. 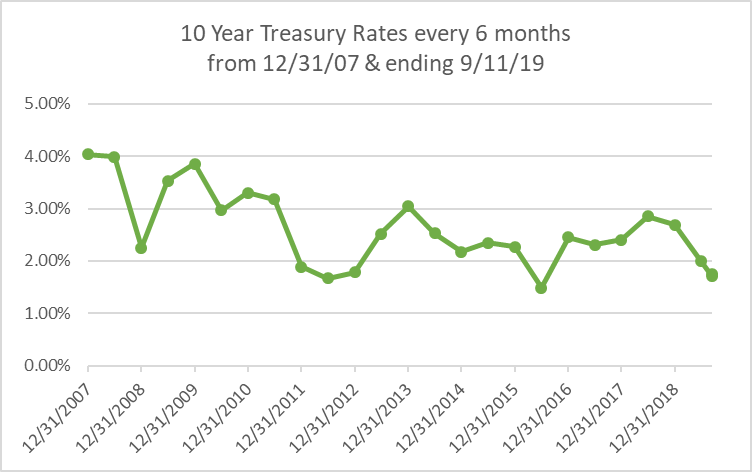 What Do Low Interest Rates Mean?

When economic growth is stagnant leading nervous investors to move money from the stock market and take refuge in bonds, bond prices go up.  That’s simple supply and demand.  And when bond prices go up, yields on newly issued bonds go down.

Right now, we have allies and trading partners with government rates as low as 0%.  Japan and the European Central Bank have NEGATIVE yields.  Their economies are in such bad shape that they are boosting their balance sheets with the help of U.S. Treasury bonds paying considerably more.

In addition to investors who are nervous, we have investors like banks, institutions and pensions that have to invest in bonds no matter what the current market offers.

All of these situations lead to the increasing price of our bonds, thus lowering interest rates.

In December of 2018, the global stock and bond markets experienced a decline when a number of longer-term and short-term concerns collided:

These concerns carried over into 2019 and have only become more exacerbated by the roller coaster ride that is trade talks with China.  Those trade talks have stalled, and tariffs continue to be assessed to products coming from China.

What is an investor to do?

The purpose of this article is not to suggest that gloom and doom is on the horizon.  A recession will come at some point, as it is a natural part of an economic cycle; but that does not mean it will look anything like 2008-2009.  A recession can be short-lived.   Oftentimes, it serves as a helpful reminder to investors and consumers that a long-term plan is necessary and should be followed no matter what environment you’re in.

Kathy Jones, Chief Fixed Income Strategist at Charles Schwab, recommends the following 3 strategies in her recent article “Bond Market:  Why is Everything Upside Down?” dated 8/21/19: 1) buy good quality bonds; 2) don’t ignore longer-term bonds; 3) diversify.  We agree and expand on each point below.

Besides, as Kathy Jones points out in the same article, there are possible fixes to the current mess. China and Germany could provide a fiscal stimulus to their manufacturing sector, which could boost their economies.  U.S. inflation has been slowly rising to more normal levels, which is a good sign for our economy.  There is also the possibility that some agreement will be made between China and the U.S. administration regarding the trade war, which could take a lot of the pressure off companies and consumers around the world.